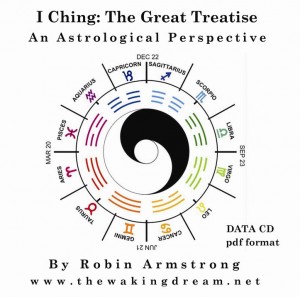 I CHING: THE GREAT TREATISE

I CHING: THE GREAT TREATISE: An Astrological Perspective – by Robin Armstrong

In the early days of Fu Hsi (3,300 BC), the planets, Sun and Moon were the heavenly Moving Lights that went through changes to which worldly events corresponded. It was not until the times of mathematical reasoning (1,200 BC) that the Moving Lights became considered as elements which interpenetrate, influence each other and change with the seasons thereby affecting health and life; rather than as planetary beings moving through their changes and setting off events according to the definite trends of the images in heaven (signs of the Zodiac), the lines on the earth (astrological houses) and the phases of relationships (Moon phases – aspects).

In this work the astrological ways of Earlier Heaven (before 1200 BC) are compared to the mathematical ways of Later Heaven (after 1200 BC).

There are no reviews yet.

Be the first to review “I CHING: THE GREAT TREATISE” Cancel reply